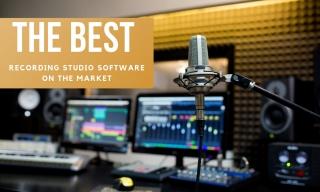 The Best Recording Studio Software on the Market

Every professional musician, DJ, sound engineer, and studio owner use specific software for all kinds of projects. Many different companies offer recording studio software; however, to determine which one is best depends on what you intend to use it for. At the most basic level, every digital audio workstation (DAW) has the same function; record, create, and edit audio. If you’re on the hunt for recording studio software, discover a few of the most popular options below.

Released in 1999, Ableton Live has grown in popularity. It is compatible with MAC or Windows and recommended for all skill levels. It has standard multi-track recording and cut/paste/splice features with seamless MIDI sequencing hardware and software. Another great feature is the 23 sound libraries with about 50 GB of music so you can make recordings as soon as you take it out of the box.

If you’re looking for the industry standard in recording software, this is it. Avid Pro is compatible with MAC or Windows and designed for industry professionals. Avid Pro is so popular among consumers, that there are entire schools and certifications dedicated to it. Pro comes with the Avid Audio Engine which consists of a super-fast processor, 64-bit memory, built-in metering, and latency input buffer to help with delays.

Suitable for MAC and Windows, Propellerhead Reason is an up and coming workhorse. The workflow for this DAW is great for those in the semi-pro range; it’s not too difficult to use but has a few complex features that require an above-average skill set. This software also comes included with an amp and speaker plug-ins—it’s great for recording guitar and bass tracks. Overall, Reason is a good platform and fast system, however, some of the plug-ins might be out of date compared to other workstations.

Compatible with MAC or Windows, Steinberg Cubase has a large underground following. This software includes Steinberg’s signature key, score, and drum editors and lets you manually edit MIDI track. Cubase has one of the biggest sound libraries on the market. The only knock on this DAW is that it’s hard to learn, but once you get the hang of it, you’ll never want to switch.

MAC or Windows users can operate Cockos’ Reaper. Reaper’s biggest selling point is its flexibility for mixing and mastering sounds. The platform supports most audio interfaces, effects, and plug-ins. You can drag and drop FX and VSTs, map MIDI controllers, as well as cut, paste, split, and edit tracks. This is an open-source, nitty-gritty software that will get the job done.

Take the time to research all your options before settling on one software. Whether you want to record a chart-topping single, commercial voice over, or the next installment of your podcast, there is a DAW out there for you.