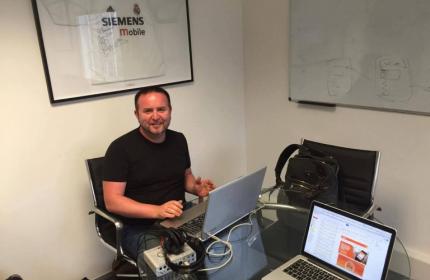 What can Enda W.

Caldwell do for YOU? Every day, Enda's voice is heard on projects around the world. He specializes in promos, narrations, commercials, and imaging that cut through; for clients like Garmin, IP Studios Luxembourg, Ryanair, LEGO, Swiss Airlines, Lufthansa, FOX Affiliates, CBS, RTE, Setanta, TV3, Aiken Promotions, MCD, Skoda Luxembourg, Tesco, Volkswagen, PriceWaterhouseCoopers Grundfos Ireland and more. From energetic promotion, narration, to drama and everything in between, Enda delivers. Who IS Enda W. Caldwell? Enda W. Caldwell is a professional Irish voiceover artist based at his own private studio in Dublin. A versatile, flexible vocal performer who possesses warmth, range, excellent voice quality, animated and believable voice acting. Enda’s voice has been used as a Cartoon character voice for both Lego as the Red Ninja and various other Lego animation characters and as a Fox in Pipi Pupu et Rosemarie directed by the late Academy Award Nominated Italian Director Vincenzo Cerami. Enda has been recording voiceovers and audio for over 20 years making him a popular and trusted choice for agencies, producers, broadcasters and direct clients worldwide. A well-known Irish Top 40/ Radio Personality for numerous internationally based stations (Pulse 87 New York / 96.7 FM Las Vegas 2013 to Present Day) (FM104 Dublin 2010 - 2012) (106.5 Riviera Radio Monaco 2008-2009) (Radio Luxembourg) (2006-2008) (Today FM Ireland) (2001-2005) (Atlantic 252 UK) (2000-2002) Irish Voice Over, Fresh, Engaging, Clear, A voice that cuts right through, Male, Young, Middle, Irish, Ireland, UK, English, European, Different, Specialist, Radio Imaging, Commercial Reads, Advertising, Natural, Warm, Flow, Popular, Bubbly. Available for Narration projects, Commercial Reads, Radio Imaging, Television Commercial Spots & Promos and Imaging, Cinematic Voice Overs, Film, On Hold and Corporate Voice Overs. British accents, Character voices, Acting and more! VOICEOVER SERVICES OFFERED • Voiceovers for Online & Video • Corporate Voiceovers / Presentation Voiceovers • On hold / Voicemail and IVR • Radio & TV commercials, promos and station imaging voice • In store & promotional VOs Your voiceover can be recorded in full broadcast quality and delivered in the required format using Adobe Audition in either .WAV or .mp3 or can be directed in a live studio to studio Skype session or via Source Connect or iPDTL. Enda is also available to appear at Dublin studios at short notice. Enda is a commercial producer, presenter, programmer and writer by trade so he has the Eagle Eye view of “what comes through the speaker” at your end. As the S&P Imaging Voice of Dublin’s New Place to Relax – Sunshine 106.8 Enda has a mellow style that suits the stations relaxing sound. Having started his career at 15 in Television and not in radio (which may come as a surprise to some!) he holds a vast depth of broadcast experience as a continuity artist and TV Voice. Check out the voice over demos, make contact, have a chat with Enda about your ideas then get ready to make impact with a voiceover that cuts through. Enda’s question remains – “What can I do for you?”